A high idle like that could be caused by a vacuum leak and have nothing to do with the ECU.
1984 RX-7 GSL-SE [size=84]My restomod project[/SIZE]

Normally if I have a vacuum leak it will hunt for idle. It always did in the past anyway. I adjusted idle down using the throttle body screw and air bleed screw. Now it's down to about 900RPM, but there's a slight vibration in the car at that RPM, so I might adjust it back up a little bit to smooth it out. At least until I get it tuned again.
Top

I drained the catch can earlier to see what I'd find, and I found a bit of fuel. More than I'm comfortable with. So I'm really hoping I'm not looking at a rebuild. I chatted with Jesse shortly and he said it could be an injector stuck open, but I'm thinking oil control rings. The only thing I've changed recently is the oil I use. He suggested 20W50 and Lucas oil additive, and I used that until recently. Andy recommended 0W30 but I found 0W40 so that's what I've started using. I changed to that right before the SevenStock trip and I used it again when I got back. Maybe I'll switch back to 20W50 and see what happens.

My passenger side window has been rolling up pretty slowly again. I started to pull the window and bracket out again and mount an L bracket under the window so it doesn't rock back and forth, but it's not rocking there. The whole assembly is rocking back and forth on the track. I also didn't notice much difference in the speed with the window angled either way. However, I did notice that my little power converter failed already. I was adjusting the rheostat and it never left 13v. No wonder the window still rolled up slowly. I remember someone saying something about Mazda not using relays on a lot of our wiring and they put a relay in line on their FC and it worked. I was looking at the diagram and wondering about putting a relay in the wire at J-06, or on IG2 at X-03 at the ignition switch would be even easier. Although now I'm thinking that won't work because it's not being switched on. Thoughts? 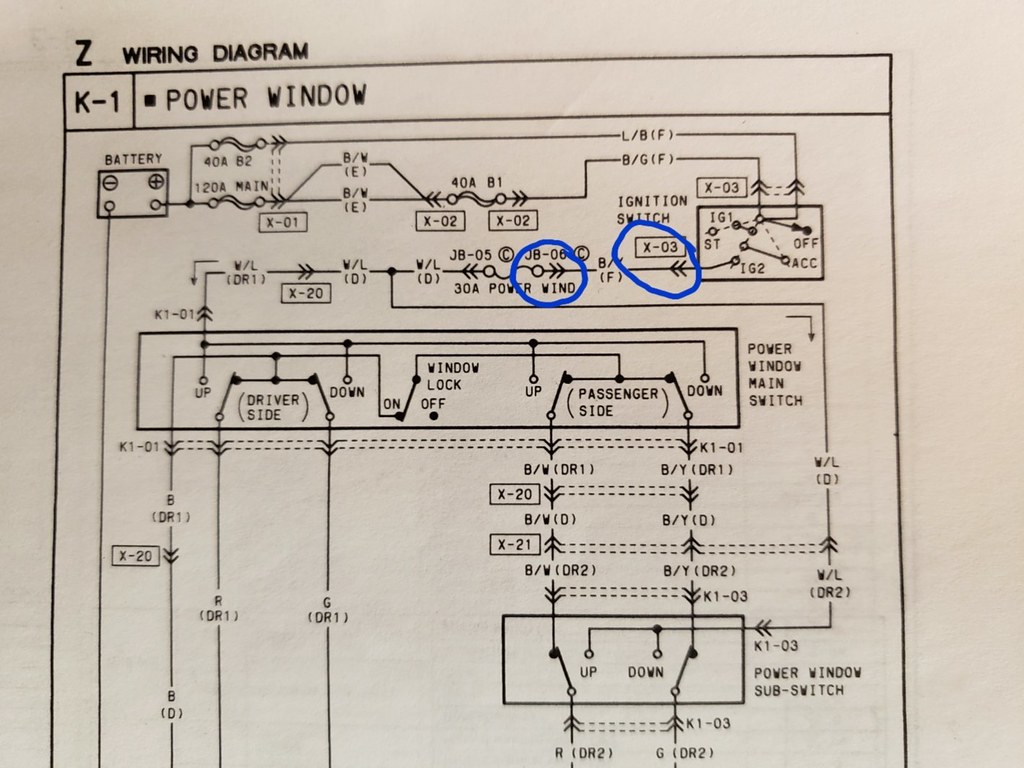 Gotta love Mazda power windows. I've even pulled the motors apart, cleaned and relubed them, that still didn't make that much of a difference. I've pulled apart and cleaned the switches. I can never get the glass to go up right.

I picked up Honda window track lube to try out. I just haven't gotten around to using it.
1984 RX-7 GSL-SE [size=84]My restomod project[/SIZE]

I asked Al about the wiring since he's an electrical engineer now haha, and he said he wired in several relays for his FB. Maybe ask him for a schematic if that Honda lube doesn't work.
Top

Honda lube is pretty much the best. Doesn't matter the application.
Top

That could be, but if the motors voltage drops to 9v, it doesn't matter what kind of lube is used haha.
Top

I'm a little embarrassed to put anything Honda on my car, it makes me feel dirty. haha
1984 RX-7 GSL-SE [size=84]My restomod project[/SIZE]

I'm a little embarrassed to put anything Honda on my car, it makes me feel dirty. haha

If you want to keep your door seals in good shape, you should try out the shin etsu grease! REminds me I should do a once over on my seals.
Top

I'm a little embarrassed to put anything Honda on my car, it makes me feel dirty. haha

If you want to keep your door seals in good shape, you should try out the shin etsu grease! Reminds me I should do a once over on my seals.

Well I'm stuck here in Kuwait, on day 6 of traveling, so I guess I'll post an update haha.

The night before I left, I tried to open the passenger door and it wouldn't open, and it wasn't locked. Well, shit. I guess I'll be replacing that door handle again. A while back I noticed it was hard to open, so I took it out and one of the tabs was bent straighter, so I bent it back. Now it's not working at all so I'm wondering if it broke off this time. I'm really sick of these door handles.

I've been toying with the idea of learning CAD so I can design a new secondary fuel rail, and I think it would be a good thing to learn anyway, a marketable skill that maybe I can use to get out of deploying once and for all lol.

I finally received the new CPU no. 2 right before Christmas, the one I ordered a few months ago. I didn't try it to see if it fixes any of my issues, but I might when I get back home if I'm not too tied up with the house renovations.

Built2Apex is releasing a brake ducting kit that has piping that is slim so it won't contact the tires when turning, so that will be tempting not to buy haha.

And I was reading recently about different options for cats out there, and one guy said that he used a Vibrant 300 cell cat and it actually removed more smell than the Bonez cat he used, which is what I'm using and I noticed there's still a lot of smell. Although my tune is still super rich too, so I'm going to get that sorted out first.

Right before I left I checked the washer fluid tank and the fluid was lower, so apparently my water injection is actually working, but maybe the map needs to be revised so it injects more or at better times. I got on the throttle quite a few times in the last couple days, so I'm guessing it's not injecting until way up in the RPM range or something.

But to be completely honest, I lost interest in the car right before I left. Probably just because I had more pressing things to worry about, but more likely because we've been talking about redoing the kitchen when I get back, and Jewel finally agreed to getting a 20ft shipping container to use for storage and replace the two sheds out back. So I'm starting to look into how to get that into the back yard. We're also planning on putting tall trees along the edge of the fence, and replacing the fence. The trees are to block noise from Constitution and also to block vision into the back yard. We were looking at doing a retaining wall, roughly about 3ft high, and then backfilling behind it and putting the fence on top of that, but we were quoted about $25-30k for the wall. Uh, no thanks. We were planning on putting two rows of trees outside the fence with that plan, but the trees should suit our purposes so I think that's what we're going to do. The problem is I need to save every bit of this money from this trip in order to pay for everything, so I'll likely be putting car plans off for quite some time now.
Top

Wow... everyone is getting domesticated :P
Top

Haha yep. I've just about reached the limit of things I want to do to the car. Now I want to fix up the house so we can sell it and find or build our forever home, and I can finally have enough space for all the cars and then some, and the room to build them.
Top

Staying in CO or moving back to Midwest?
Top
Post Reply
2354 posts

Users browsing this forum: No registered users and 29 guests