Definitely not moving back midwest lol. We really want to stay in Colorado but if they keep pushing gun control and all the other stupid shit we're going to leave. Thinking maybe Wyoming, Idaho, Montana, Texas, not sure. The problem is the disease that's infecting Colorado is spreading to other states also, so at some point we're going to run out of places to go and we'll have to stand and fight.
Top

Yeah I'm down for that when I get home.
Top

I tried to make it the whole trip without buying a bunch of car parts. And although I bought the combo light covers right before I left, I made it pretty far into the trip. But I just had to go looking at new posts on 7club and seeing the posts in the RX-7 group on facebook.

There's a guy in C Springs selling a pair of Kirkey Road Race seats and I've wanted to try these for a while to see if I can modify them to get me down on the floor. So I told him I'd come look at them when I get back if he still has them.

I saw a post in the fb RX-7 group about a new short shifter that JP3 Motorsports came out with. They based it on the Mazdaspeed shifter, and Mazdatrix had also made one years ago based on the MS shifter but they ceased production some years ago already. I had the C's shifter on my car for years already, which is similar, but it was starting to get sloppy so I got the CUBE Speed shifter (similar to a B&M, which is also discontinued and hard to find). This one is very notchy, which I like, but it doesn't work well for the track. Being that it's somewhat tough to get into gear quickly, it makes me not want to shift and that hurts my times. The C's shifter I had didn't use a bushing for the small shift lever, it was just milled out. I like the idea of being able to swap that bushing if and when it gets sloppy, and the MS, Mazdatrix, and this new one from JP3 all have that. They're asking a pretty penny for it though, and it took me a bit to justify spending that kind of money just for a short shifter. But I figured the MS and Mazdatrix shifters used to sell for about the same price, and the MS shifters are going for almost double these days, so what the hell. And they made some improvements on this one even over the MS shifters.

The other big money purchase I got sucked into is a titanium front strut bar from Garage Alpha. They have two different versions and one of them looks similar to the Improved bar, which I bought a few years ago and it no longer works with my setup. The other version is based on the stock bar and weighs about 2lbs (not that it really matters, but it was part of my excuse to justify it), and I'm pretty certain this one will work for me. I thought about trying to find a bar that is adjustable, but after doing some research I think it's pointless.
https://garagealpha.com/collections/cat ... bar-type-a

Both the shifter and strut bar are still in production phase and not actually shipping yet, but should show up not long after I get home.

Oh, and there's also a duck tail spoiler by ZK Motoring that actually hard mounts to the screws just inside the hatch instead of just sticking to the taillights and I'm planning on getting one of those. I asked him about a group buy and he said he might do one this summer, but it's funny because it's the cheapest out of the four things and all of a sudden I'm worried about saving money lol. So I might just go ahead and pick up one of those as well.
Top

The kirkey seats require a back brace, don't they? How will you run the brace to the back seat area?

Maybe it's not an issue for you since you essentially have to sit back there anyway.
Top

I was planning on running a back brace to the rear harness bar. But where it mounts to is negotiable I guess lol. I think it only requires a back brace by class rules, but I'd want it regardless for safety. I was planning on doing something like the pic below and do the same type of end on the other side and do a bushing in both ends, and make the length adjustable so the seat can still slide up and back and still have use of the brace. Although now that I'm thinking about it I might do the bushings in the ends of the brace bar instead of the seat and harness bar. 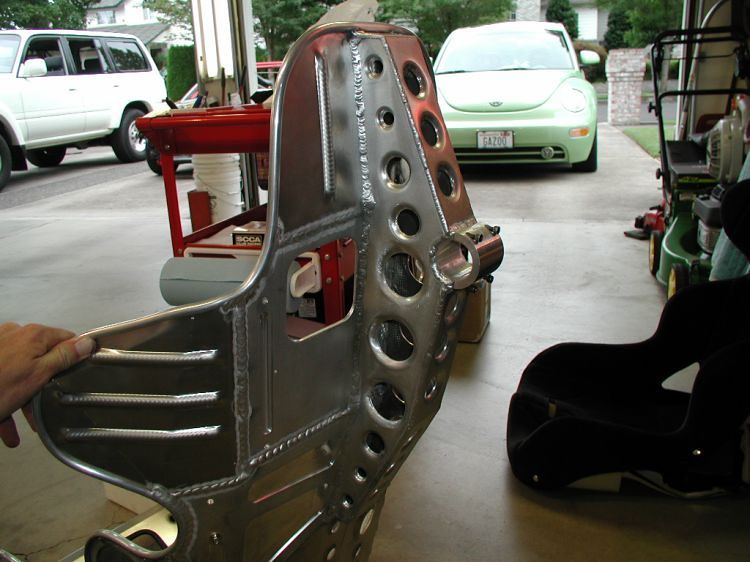 But yeah, there isn't much distance from the back of my seat to the harness bar anyway, maybe 1.5' or so.
Top

I've talked with Jason Kaiser about this before, but I think I'll be designing a new secondary fuel rail with him or someone else in CAD, or if I can learn CAD in a reasonable amount of time I'll do it myself. This stems from the pulsation issues Chris had when he was tuning it in 2015, but it got me thinking that while I'm trying to incorporate a pulsation damper right into the rail, I might as well increase the inner diameter a little since I'm running extra injectors, and add anything else I want, within reason. I don't remember for sure what the ID is on the rail right now, but I'm guessing it's about 1/2". Chris mentioned in a thread on 7club that it wouldn't hurt increasing it to 5/8" or 3/4".

I've been looking at dampers to use, and I was planning on using the one that CJM uses on their rails, which is from an R35 GTR. It's around $15, which is very nice, but mounting it requires a little extra work; making a bracket, and that bracket takes up extra space. I've decided on a Radium Engineering FPD because it threads in (thus not taking up extra space) and it has a port for a vacuum line so it will adjust to the fuel pressure.
http://www.radiumauto.com/Fuel-Pulse-Da ... -P759.aspx
https://cj-motorsports.com/products/cjm ... th-y-block

I'm also hoping to have two -6 inlets on it, that way I can hook both lines directly to the secondary rail and then Y off to the primary rail from that, instead of doing a Y to a single line outside of the rail. I feel like there is too much chance of causing extra issues if I Y to a single line and then go into the rail. I had also read that to solve pulsation issues I should switch back to rubber lined fuel lines instead of the teflon ones I'm using right now. But I want to see if I can avoid that and see if the FPD fixes it all first.
Top

Interested in your integrated fpd idea. Send me some crude sketches when you get a chance. I'll be working nights and maybe do some drawing. The extrusion is cheap so we can try some different diameters and see what works. You are running 2 primary and 4 secondary injectors right?
Top

Ok will do! I'll probably just send a couple pics of the rail I'm currently using with some MS Paint modifications haha. Yeah, 2 primary and 4 secondary.

I picked up the Kirkey seats from the local guy. I have to cut down the shoulder bolsters A LOT, they're like 24" and they'll have to be cut down to around 20", or maybe even a bit shorter. But the sides on the bottom are only about 18" so they're well within the width between the door panel and tranny tunnel.
Top

Are you going to weld a big crazy bracket on the back of the seat like the one pictured? That's some good TIG practice!!
Top

Well, I don't know if I'LL be doing it lol, but someone likely will. I'm planning on still doing that, along with cutting the bottom and dropping the butt down some, trimming the shoulder bolsters down, and maybe doing something with the harness holes since they're about 2" too low for my shoulders.
Top

I got the shifter the day before we left CO and the strut bar was attempted delivery for the first time today, but since we're not back for another two days my neighbor is trying to grab it for me. Hopefully he's successful and it doesn't get sent back. And I have a 929 master cylinder I got for free from one of the New Mexico guys that UPS is holding until Friday. I don't plan on using it at the moment, but I have thought about it before. And especially since it's brand new, free is hard to pass up haha.

I'm excited to get the shifter and strut bar installed and do a compression check and hopefully fix the oil catch can issue before the car show and Golden Super Cruise on Saturday. I might even swap in the basic brake pads and see if Andy can fine tune my water injection map before Saturday, but we'll see.
Top

Is it just the catch can symptoms that lead you to believe there could be compression issues? Would a leak down test give a more comprehensive result?

As soon as I'm done tiling the house brakes and sway bars are at the top of my list. What brakes are you using?
Top
Post Reply
2354 posts

Users browsing this forum: No registered users and 28 guests